We grew up in a previous era of riots, student unrest, and fear of ecological catastrophe. These events were followed by the additional horrors of inflation, gas lines, and polyester leisure suits. We first met at the University of Richmond, where we enjoyed the final days where in college one could openly tell jokes, drink beer, and even get an education.

With the country again sinking into chaos, we decided to team up to restore national harmony and preserve what was good about this country for future generations. 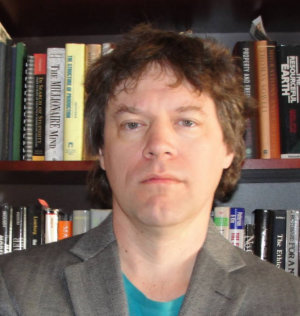 Carl S. Milsted, Jr. has a PhD in physics and writes software for a living. He got into alternative energy and anarcho-capitalism in during high school thanks to the 1978-1979 National High School Debate resolution and the science fiction of Robert Heinlein.

He then spent a quarter century as a member of the Libertarian Party, beginning as a radical anarcho-capitalist and slowly evolving his views towards something more reasonable and potentially popular. (Age, wisdom, and arguments lost will do that.) During his last decade as an LP member he got serious: working for campaigns, creating a computerized political quiz, experimenting with outreach ideas, working booths, and networking with a wide variety of other political groups. He served on several national Libertarian Party committees and chaired the Buncombe County, NC. LP for a time. Tired of losing, Carl led an effort to turn the LP into a more realistic, bigger tent party capable of winning elections. The result was the Portland Plank Massacre of 2006. Since the LP’s anarchist membership oath survived this effort, he left the LP and has taken an extended break from the political game.

With the major parties going insane, and the prospect of even worse inflation and shortages than the 1970s on the horizon, he has decided to get back in the game, this time presenting a reasonable vision of liberty that millions of Americans can happily get behind.

He can be contacted via this electronic mail address:

Steve Douglass grew up first on a farm in Southeastern NC, then moved to Seattle, and finally settled in Virginia Beach. After college he settled in Richmond, set up a landscape design firm, and raised a family. Now living on the old family farm where he started, Steve spends his days growing natural produce for his CSA Membership, and his nights blogging about farming, cooking, music, cultural trends and politics.

Having grown up with one foot in the rural South, the other foot in semi-hifalutin Northern circles, an arm somewhere on the West coast, and the other on the East coast, Steve has a unique Twister-angled, view of culture and politics.

He can be contacted via this electronic mail address: